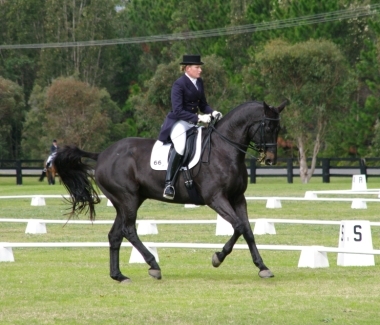 Richmeed Wintergold was purchased at the Ryan's auction as a three year old.  Jack was Katina's first dressage horse and together they have worked through the levels.  In August 2013 Jack competed in the Inter 11 at the Manning Valley Dressage Championships achieving 60%, he even scored 7.5 for his one time changes!

Jack's achievements have been a testiment to faith, determination and defying the odds.  In 2002 Jack was diagnosed as having a heart murmur, the consequence of having contracted a flu virus.  Veterniary opinion was that Jack would be unable to continue through the levels as he would not achieve the fitness required.  Katina worked with horse herbalist, Angela Davison, and with herbal tonics Jack's capacity to work increased.  The heart murmur meant that Jack was short of breath, but as he got fitter his breath increased.  The wonderful thing about dressage is that it is the quality of the work that matters and not the quantity; Jack's training progressed with quality half hour training sessions.  Then in 2007 on a rainy day coming home from Sydney, Katina's car lost traction, the horse float jack-knifed and flipped over.   Jack had to lie in the wreckage until the SES arrived and cut him out.  Miraculously he had no major injuries, just jarring and sore muscles.  Angela was called to help with his recuperation and over time he returned to health.   So Jack may not have reached his ultimate potential but we are very pleased with what he has achieved.

In his older years Jack embarked on a new career as a schoolmaster for young rider Sarah Godwin. 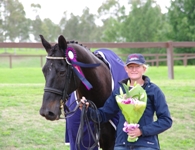 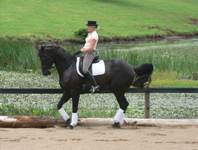 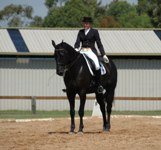